No, no, no, I’m not trading in my truth jihad for Homeland Security jackboots! It’s the witch-hunt that drove me out of the academy, and robbed me of a projected $2 million in lifetime earnings, that’s proof America has followed Nazi Germany, Mussolini’s Italy, Franco’s Spain, and Pinochet’s Chile down the path to fascism.

That is what Naomi Wolf says in her New York Times bestseller The End of America, anyway. 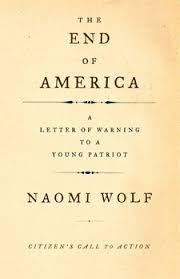 Wolf writes that one of the ten steps to fascism is: TARGET KEY INDIVIDUALS.

She considers me one of those key individuals. I’m flattered. She even compares me to the famous literary scholar and diarist Victor Klemperer, one of the “key individuals” targeted by the Nazis and witch-hunted out of his university job.

Wolfe describes the witch-hunt against Ward Churchill at the University of Colorado, then continues:

“In 2006, Kevin Barrett, a lecturer on Islam at the University of Wisconsin – another state school – was at the center of a similar firestorm. Barrett ‘has disputed official findings on the perpetrators of the Sept. 11 attacks,’ though a university review established that he had not discussed his personal views in the classroom.

“But conservative talk radio attacked Barrett, and Wisconsin Republicans in the legislature asked for action: ‘Republican Representative Stephen Nass announced: “Barrett has to go.”‘  Representative Nass used the strategy that had worked in Colorado. Sixty-one Wisconsin state legislators – sixty of them Republicans – condemned Barrett’s ‘academically dishonest views’ and asked that he be fired. The resolution was sent to university officials. The University of Wisconsin is a state institution like Churchill’s university (and Klemperer’s own Dresden Technical University, where he had been chair of Romance Languages and a Montesquieu scholar, before he was fired). Provost Patrick V. Farrell, whose own budget and salary are determined by the state legislature, tried to resist the pressure: ‘I want to avoid as much as we can creating some kind of political test for instructors or faculty,’ he said.”

Please note that not one of the many thousands of teachers in the University of Wisconsin system is able to refute my “academically dishonest views” – even when offered $1,000 for a ninety-minute refutation! It is those who cannot defend their views using logic and evidence – including Rep. Nass, who has repeatedly declined challenges to debate me on 9/11 – who are “academically dishonest.”

Wolfe goes on to discuss Stanley Fish’s New York Times op-ed slamming me for something I had never done: Pushing my own ideas on my students.

“In times of pressure, citizens can soon tell ‘which way the wind is blowing.’ Individuals realign themselves and their views. Shortly after (the Barrett U.W.-Madison) furor, Stanley Fish, now a professor of law at Florida International University, wrote an op-ed for the New York Times that argued that professors who introduce partisan ideas in their lectures deserve to be fired. Academic freedom, he wrote, does not include the right to express such views in the classroom. (Martin Heidegger wrote an essay in 1933, ‘The Self-Assertion of the German University.” Supporting Nazi views of the purpose of the academy, Heidegger argued that ‘academic freedom’ was a passé notion that  should be expelled from the German university.)”

Wolfe sums it up:

“Whether driven by Mussolini or by Goebbels, by Pinochet or by China’s Politburo, it’s always the same tactic: The state leans on university administrators, who lean on professors and students.”

Unfortunately, just like the other wonderful Naomi, author of The Shock Doctrine, Ms. Wolfe is too timid to come right out and say what she, and her publisher at Chelsea Green, obviously know:

American fascism is built on the 9/11 Reichstag Fire, and will not end until that false flag atrocity is publicly and definitively exposed.