Maher argues that the Fatty Bin Laden video, which the US government and media have cited as alleged proof of Bin Laden’s guilt, was forged by gathering Bin Laden footage from various filmings, one of them a US intelligence “sting operation,” and cutting and pasting the footage in such a way as to make Bin Laden look guilty.

That wouldn’t exactly surprise me. 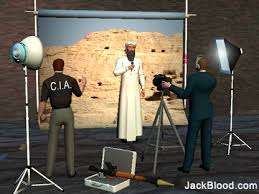 Obviously the criminals who put out the OBL “confession video” did some cutting and pasting of low-grade “OBL footage,” whether found or fabricated. Personally I think they probably found a fat guy who almost resembles a member of the Bin Laden family if you squint really, really hard, and hired him to do a really bad fake. Maher thinks the fat guy is actually Bin Laden. He explains the guy’s obesity by citing an alleged funhouse mirror effect of digital compression. He thinks some of the original footage, but not all, was produced by an elaborate conspiracy of intelligence agents. Sounds like a crazy conspiracy theory to me. But crazier-sounding things have turned out to be true.

Maher, like many 9/11 researchers, is passionately attached to his chosen area of research. He is absolutely adamant that the bogus Fatty Bin Laden video was forged in the manner he suggests, rather than some other way.  The problem is, Maher has picked a meaningless fight with David Ray Griffin and Bruce Lawrence in an apparent attempt to obscure the indisputable fact that the video is indeed bogus – a forgery – and a clear case of obstruction of justice, incitement to genocide, and a long list of other crimes; and that Bin Laden was  obviously innocent of the crimes of 9/11/2001.

The title of Maher’s article “How Osama was Caught Confessing to 9/11” is a typical example of the treasonous disinformation cranked out by Counterpunch, whose reasons for running interference for the 9/11 criminals could perhaps be discovered by waterboarding Alexander Cockburn. If he got the same treatment that Khalid Sheikh Mohammed got, Cockburn could easily be set up as a self-confessed 9/11 mastermind. Come to think of it, let’s waterboard ALL the 9/11-traitor journalists until they confess to being 9/11 masterminds. That would be an appropriate punishment for their crime of not debunking the 9/11 Commission Report, whose preposterous “19 hijackers” fable is sourced to secondhand alleged reports from KSM’s endless waterboardings.

Below are some claims Maher sent me (in italics) followed by my responses.

On Oct 2, 2011, at 7:01 AM, Maher Osseiran wrote:
* Dr. Lawrence’s statement that [the Fatty Bin Laden “confession video”] was bogus or a fake is based on hearsay. He based on statements by supposedly people in the know, some intelligence buddies; are we now placing our faith in the veracity of people in intelligence. Has Dr. Lawrence gone back to them and said, hey guys, look what this guy is saying, please weigh in. Example, if I had taken the word of those CIA guys that the Predator intentionally rammed the helicopter without any scrutiny, I would have pushed the article into the conspiracy theory area. In later article I did relate what they said and said that the incident is worthy of an investigation.

There is hearsay and there is hearsay. Dr. Lawrence, as someone with a prestigious scholarly position, risked his career to say what he said. (Look what happened to me!) He clearly would not say something so potentially destructive to his career and reputation if it were not true. And if there were even the slightest doubt (or perhaps even if there were not, but he just wanted to insuure his career and perhaps his life) he would retract his statement in the most clear and forceful way, and he would have done so immediately. Since he has not, the statement stands and is absolute “gold standard” for truth and accuracy.

* Please explain to me the intermingling of Predator part and Black Hawk parts with bin Laden’s kids handling them.

Please explain to ME why, if this was really OBL, they’d throw the body in the ocean before any independent ID could be performed.

* Please explain to me how a portion of the tape has strictly digital anomalies while the other half has strictly analog anomalies.

It’s a forgery badly stitched together from various kinds of footage. The details are interesting to speculate about, as you do, but that speculation is of very limited relevance, because any way you slice it, it’s “bogus.”

* Did you read “Osama’s Confession; Osama’s Reprieve” or just did a rush job.

Maher, I’ve read thousands and thousands of articles on these and related subjects. Let me go back and look at it.

Okay, I just looked at it. Yes, of course I read it when it came out. The documentation, which should include the dates, times, and transcripts or recordings of any interviews you did with sources that gave you this information, is grossly inadequate by scholarly standards. (Lawrence’s statement, by contrast, is fully documented and, while hearsay, “gold standard” due to the improbability of its being false for reasons already mentioned.)

I don’t find Ed’s total picture necessarily convincing. [Ed Haas implies that the only reason not to support the illegal invasion of Afghanistan is because the Fatty Bin Laden tape is of doubtful provenance. Likewise Maher overestimates the importance of his own work on the tape. That tape is obviously “bogus” no matter how it was forged, and not especially important given that Bin Laden  couldn’t possibly have demolished the WTC, bombed the Pentagon, run a shell game with airliners, etc.]

* Did you read his piece “Afghanistan; why I cannot support the war”? it was the last piece he wrote and summarizes all his findings.

The article is fine as far as it goes. But since we KNOW that Zelikow must have scripted the coverup from a script for the operation itself (presumably his own), that the WTC skyscrapers were demolitions, that no big plane hit the Pentagon or crashed in Shanksville, that there were no hijackers or hijackings, etc. etc.,  the whole Bin Laden – 9/11 connection is a moot issue anyway, and harping on it the way you do seems to be a disinformation operation intended to support the myth that Muslims, rather than the enemies of Muslims, might have somehow conducted the attack.

Finally, you believe the tape is a fake, I don’t,

You claim it was stitched together from real home/sting video footage, out of context, in a way designed to make it look like Bin Laden is taking credit for 9/11.  That is just as “fake” as if it were completely digitally created.  No meaningful difference.  Either way, whoever created the final product is guilty of obstruction of justice in a case of mass murder and high treason.

but, in either case, since this tape was never authenticated, do you seen the need for an independent and transparent authentication process. If your answer is no, drop the open mindedness claim.

I would in the least expect you to call for an independent and transparent authentication process.

Again, since we know 9/11 was a false-flag attack by the enemies of Muslims, designed to trigger an anti-Muslim genocide, Bin Laden’s statements on a tape that is an obvious forgery, whether produced the way you suggest or by other means, are irrelevant.   I could pay a department store Santa Claus to confess to 9/11, and it would link Santa to 9/11 in the same way discussion of this tape links OBL: at the level of myth, not reality.