Press TV has conducted an interview with Kevin Barrett, co-founder of the Muslim-Christian-Jewish Alliance, from Madison, to shed light on the US recent remarks at the UN General Assembly, calling Bahraini popular uprising “a sectarian one.” 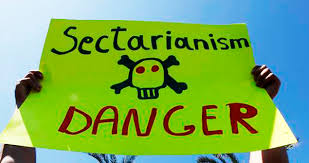 Press TV: Let us look at some of the US statements made there and most of all, I am going to start with what the US President Barack Obama said at the UN General Assembly (UNGA), which he said that the uprising there is a sectarian one.

Now, what is interesting about that is A) that they angered the regime, but at the same time it could be a positive and a negative, that there is a problem and the negative being that is the sectarian one which is not with the cases there. what do you make of the US President Barack Obama’s statement there at the UNGA?

Barrett: I think President Obama put his foot in his mouth once again and managed to alienate both sides in Bahrain, just like he managed to alienate both sides in Egypt by seemingly offering lukewarm support to [ousted Egyptian] President Morsi, while at the same time acquiescing in this brutal coup d’ état that overthrew Morsi, and then allowing [Israeli Prime Minister Benjamin] Netanyahu and the Israelis to pressure him to keep the aid flowing to this brutal regime in Egypt. He [Obama] alienated both sides there and now he has done the same thing in Bahrain.

Nobody in Bahrain really wants to think about this as a sectarian conflict; the Al Khalifa dynasty which is just another of these [Persian] Gulf sort of puppet autocratic dictators that was, you know, created by the West, the country was carved out by the West and these wealthy little sheikhdoms were created and they have reached the end of their run now, but the Al Khalifa regime does not want to think of themselves as a sectarian government and the democracy movement does not want to think of itself as sectarian either. It sees itself as a democratic pro-justice and Islamic movement.

So, I think when Obama is calling it sectarian, he is not winning any friends anywhere, although there may be some truth in what he is saying. In fact, the real issue is one of Islam and democracy; that is, a populous Islamic wave has been rising in the Middle East for several decades now and at the same time better literacy and communications have led to higher aspirations for democracy.

So the whole region is moving towards winning independence under some form of Islamic democracy and the old guard and all of these countries as the other guest [Richard Millet] said very well is doing what it can to try to hang on to power.

So, yes, I think it is true that the Al Khalifa dynasty likely even the Ibn Saud dynasty next door – which has invaded Bahrain and propped up all of these repressive measures – is terrified about what the future may bring as the people of the region become empowered and seek to control their own destinies. And I am sure the US is afraid too.

Press TV: Many around the world who are aware of the uprising in Bahrain are looking for the two countries in particular to see they are going to make any moves and those two countries being the US and the UK; the report that you may be aware of, the senior advisor to the regime there on policing and securing John Yates, basically, the former assistant commissioner of the Scotland Yard, is known that he has accompanied the Bahraini ministry of interior officer on many trips to London, that they have met with the members of Britain’s MI5.

Do you think that the UK in any sense is giving the regime there directions to handle the uprising that is taking place?

Barrett: I think that is very likely; the British government has been instrumental in propping up these [Persian] Gulf monarchies. It actually created them and it continues to advise them. Essentially all of these [Persian] gulf sheikhdoms are artificial creations of Western imperialists, who went in to carve up the region and managed to prop up their favorites, these thrones.

And now that those thrones are tottering and getting ready to collapse, I think that the British who are the most experienced Western imperialist at dealing with the Middle East are probably taking the lead in handling the relations with this Al Khalifa dynasty, with advising them on how to deal with this.

Obviously the US is also playing a big part. The US has its Fifth Fleet based in Bahrain and it is absolutely crucial to US projection of power in the [Persian] Gulf and in the Middle East. The US of course knows that if democracy breaks out in Bahrain, the people of Bahrain are probably not going to want to keep that base in their country.

So, this democratic wave in the Middle East is threatening to liberate the region from this sort of a century of all the Western colonial domination and that is the real issue that underlies all of these sort of surface sectarian battles.

I would agree with the other guest that, yeah, there are sectarian tensions but why? The answer is that the Saudi ruling family and its allies and the Israelis in particular are fanning the flames of these sectarian tensions by demonizing Shia movements.
And the reason they are doing that is that the Shia movements such as Hezbollah and of course the Islamic Republic of Iran have succeeded to a certain extent in challenging Western and Zionist domination of the region and in forging alliances with other Muslims, with Sunni Muslims and with even relatively secular people who are interested in justice.

So, there has been this axis of resistance that is threatening to free the Middle East. And in order to try to stop that process, the Ibn Saud family and the Israelis and of course their American sponsors have all teamed up to bombard the region with anti-Shia propaganda designed to try to whip up sectarian tensions and anger the Sunni majority against the Shia, get them fighting each other in a classic divide and conquer maneuver in order to try to hold back this democratic Islamic awakening.

Press TV: Well, I am not going to comment on that last part of your statement that is the beginning of that statement Dr. Barrett, I would like to ask your reaction when Richard Millet says that the UK does not have any right to interfere another country’s affairs. We have cases where Britain and the United States have come out, like we see all the threats that are leveled against Iran for example from the US, countries like the US, like the UK, they can do something but they are deciding not to.

What dynamics are involved behind that decision?

Barrett: Well, the final remark by the guest was quite extreme – that he cannot blame the UK for supplying weapons to this repressive government; well, sure you can; how can anyone not blame them? It is completely against all human rights norms. But yeah, in terms of the larger issue of these Western powers not having any business, getting involved in this…, can try to control these countries in regions; I agree with that and I wish that the leadership of the Western countries would also agree with that.

Unfortunately as we all know, these Western countries are constantly interfering in internal affairs of other nations, including launching invasions, including murdering activists with drone strikes, murdering a lot of by-standers and wedding party guests and women and children with these drone strikes, in arming very unpopular governments to the teeth, which has recourse what is happening in Bahrain; and with propping up the Saudi government which would not last for ten minutes if the US were not completely dominating that country that cannot even fly their own planes or operate their military equipment and yet they are buying more American military equipment than almost any other country, just piling them up and letting Americans keep it going.

It is just really sad the way that this Middle Eastern region has been willing to acquiesce in domination by the UK, the US, the Zionists and these Euro American based outside forces. So I am really kind of confused about where the other guest is coming from.