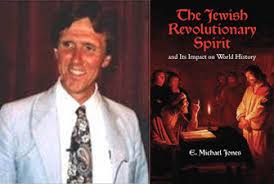 First hour: E. Michael Jones, editor of Culture Wars magazine, is one of America’s most interesting dissident intellectuals. Driven out of Notre Dame University for opposing abortion (!) Dr. Jones has since developed a fascinating historical analysis of the ongoing struggle between Christianity and what he calls “the Jewish revolutionary spirit.” In his view, Israel’s habit of taking over Palestinian TV stations and broadcasting pornography is just the latest example of Jewish tribal power’s use of vice – sexual deviation, usury, and various forms of organized crime – to weaken the community, family, and religious values of “enemy”societies, including the global Christian and Muslim communities.

At the Hollywoodism conference in Tehran, Dr. Jones suggested that Hollywood (an almost entirely Jewish enclave) has been dumbing down America and the world through lowest-common-denominator appeals to sex and violence as part of this age-old “culture war” against the goyim. And it’s working! American culture is in the gutter – while American Jews (less than 2% of the population) earn twice as much as non-Jews on average, make up roughly half of America’s richest billionaires, grab as much as a quarter of available openings in Ivy League universities through nepotism, completely dominate both big media and “alternative” media, contribute roughly half the campaign money that buys the loyalty of politicians, are wildly over-represented in most areas of power and privilege…in short, they’ve completely taken over, as the Chuck Hagel hearings (and the silencing of the truth about 9/11) demonstrate.

Is all this…gasp…anti-Semitic? Or is that word just an empty shibboleth, a smokescreen designed to obscure our view of historical reality? Let’s ask Dr. Jones! 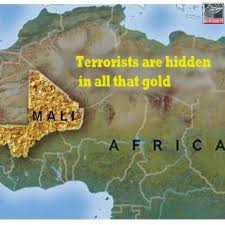 Second hour: What’s really going on in Mali? Christof Lehman, an advisor to Malian opposition leader Dr. Oumar Mariko, says the conflict there is yet another example of the Zionist-imperialist strategy of smashing up existing states into smaller units that can be more easily controlled and looted:

The March 2012 coup d´etat was prompted, when opposition parties and high-ranking military officers became aware of a plan, hedged by the former President Touré, to sell off northern Mali to France and the Touarq. Many of Mali´s most valuable resources are located in the North.

The Zio-imperialists smashed Iraq into a Shi’a south, a vanishing Sunni center, and an oil-rich, Israeli-controlled Kurdish north. They smashed Sudan into a Muslim north and a resource-rich, Israeli-controlled “African” south. They smashed Libya into a victorious salafi east, and a defeated pro-Qaddafi west. They’re trying to smash Syria along ethnic and sectarian lines. They would like to do the same thing to Iran. This – the new Zionist-led imperial strategy of destabilizing and destroying nations in order to loot their resources – is what is really happening in Mali today.