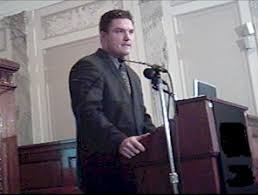 Two full hours with Grant Smith, exposing the Israeli lobby’s iron grip on America! Terrorism (false-flag and otherwise), assassination, nuclear blackmail, spying with almost complete impunity…the Israelis have squashed the USA under their bootheel using every vicious, underhanded, illegal technique imaginable. Our Constitution is gone, our economy is kaput, and still the Israelis push us to start yet another war…a war that could finally finish us off.

Speaking of which: Is Netanyahu is pushing for war with Iran in order to keep the lid on 9/11 as I recently suggested? Grant thinks there won’t be a war – he suspects it’s all a “strategy of tension” hoax to keep bleeding the American taxpayer on behalf of the Zionist parasites. He calls this “scare everyone to death in order to steal their money” approach neoconomics.

Grant Smith has recently drawn praise from an increasing number of Middle East experts including Philip Weiss (“the best investigative work”) and James Petras (“Grant Smith is without peer as an archival scholar.”)

Grant is Director of the Institute for Research on Middle Eastern Policy (IRMEP) and the author of  Divert!: NUMEC, Zalman Shapiro and the diversion of US weapons grade uranium into the Israeli nuclear weapons program , as well as many other classics including Spy Trade: How Israel’s Lobby Undermines America’s Economy, and Foreign Agents: AIPAC from the 1963 Fulbright Hearings to the 2005 Espionage Scandal.

Note: Tom Tvedten, originally scheduled for the second hour, couldn’t make it, so Grant Smith stayed on for the full two hours.