Sanders on Monday criticized the US government for its massive military spending and tax breaks for wealthy individuals and corporations while eliminating social benefits for low-income and middle class families.

He proposed spending $1.5 trillion over 10 years to create a universal child care and early education system, to be funded by taxing the wealthiest Americans.

The proposal is the latest by the frontrunner Democratic candidate that would vastly expand America’s social welfare system as he seeks the nomination to challenge Republican President Donald Trump in the November election.

Sanders is proposing massive overhauls of the US economy, including taxing the wealthiest Americans to provide free colleges and ban private health insurance in favor of a government-funded system that guarantees universal health coverage, a system already carried out by many developed countries.

“We have a moral responsibility as a nation to guarantee high-quality care and education for every single child, regardless of background or family income,” the Sanders campaign said in a proposal posted on his website.

During an interview on CBS News’ “60 Minutes” Sunday night, he was asked how much those programs would cost and how his administration would pay for them.

Anderson Cooper asks Bernie how will he pay for his universal childcare plan. Bernie goes off, “I’m getting a little tired … No one ever asks how we pay for $750 billion in new military spending or $1 trillion tax cut for the rich or Wall Street” 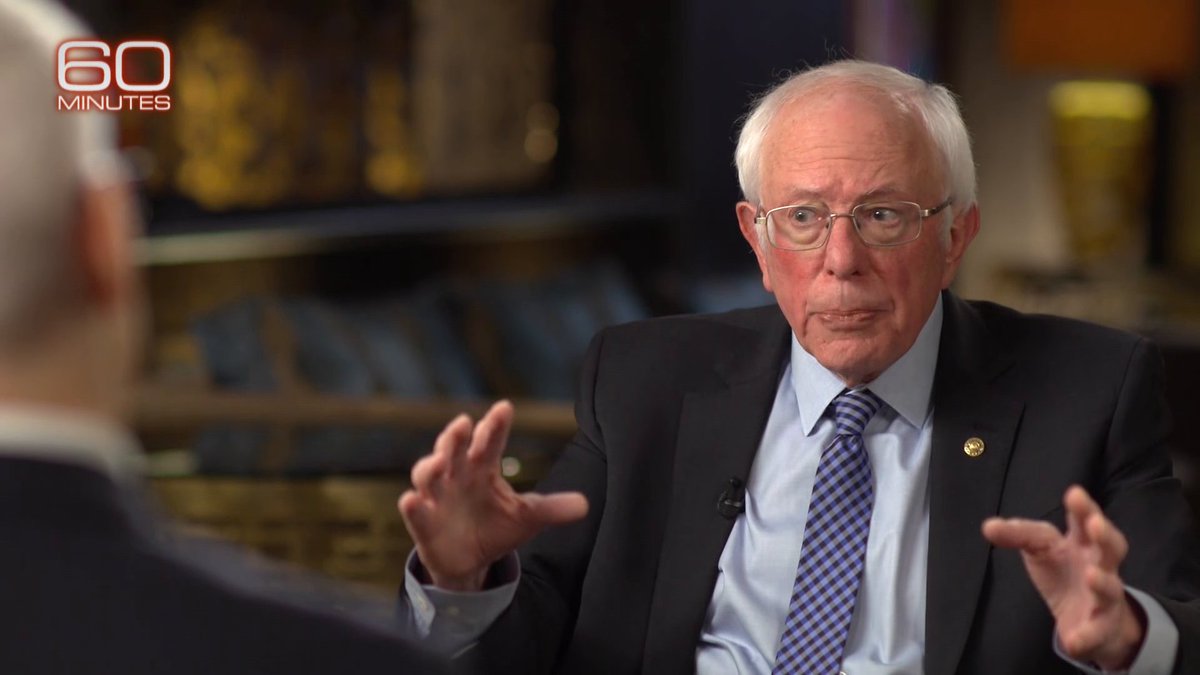 Dr. Barrett said that “Sanders is committing what amounts to heresy in the American political religion by questioning the huge giveaways to the military-industrial complex, and to the very richest Americans.”

“Bernie Sanders is being asked how he can finance his social welfare proposals, including free college education, and a huge increase in spending on taking care of small children through early childhood education and care. And his answer is, why would there be a problem finding $1.5 trillion to do that, when Trump could with one flick of the pen give away that much money to the rich in tax rebates. And when America can spend 750 billion dollars a year on its military budget, why can’t it find the kinds of money that other countries managed to find to pay for their social welfare services,” said Barrett, an author, journalist and radio host with a Ph.D.  in Islamic and Arabic Studies.

“I think Bernie Sanders has a pretty good point; the United States of America is the wealthiest country in the world. And yet, its people, especially its poor people are much less will taken care of than those in other equivalent, well off nations,” he told Press TV on Tuesday.

“And the reason for that is twofold. That is the United States is throwing money at its billionaires. It doesn’t tax the rich the way most other developed countries do. And it’s throwing money at its military industrial complex, to the point that the US military budget is larger than the combined budget to the next, six, seven, some say even 10 nations combined, depending on how you add it up,” he said.

‘Sanders talks about a paradigm shift’

“So Bernie Sanders is talking about a paradigm shift. He’s basically talking about making the United States of America, a normal country and that of course freaks out the American exceptionalists. They believe America is the exceptional nation, so it has to be exceptionally evil in terms of being pilfered by extremely wealthy people, in terms of murdering people all over the world with its military machine,” he stated.

“Bernie Sanders doesn’t see why the United States needs to be so exceptionally evil. Why can’t the United States spend money to try to make things better for human beings? And I think he has a great point there,” the analyst said.

“I would question his notion that necessarily spending money on daycare is a good thing. Here in the United States, we have a social ethos in which women feel pressured to put their babies in daycare, and to pay other women minimum wage to take care of large groups of other people’s babies. This is not optimal. What we need is a system that would help mothers take care of their own children. But because of the feminist revolution, and the other kinds of anti-family ideas that have been pushed through here, that’s probably not going to happen,” the scholar said.

“In any case, Bernie Sanders‘ proposal is certainly an improvement on the status quo. And it’ll be very interesting to see him going up against Donald Trump, who is the ultimate in psychopathic, narcissistic billionaires who want to grab everything for themselves. And Sanders represents the exact opposite. So perhaps we US Americans will actually have a meaningful choice in the upcoming presidential elections,” he concluded.